In the last six months, we’ve been very busy here in the Druid workshop, developing and testing new versions of our PIC-based chips. This work is now complete, so I’d like to introduce the new chips. 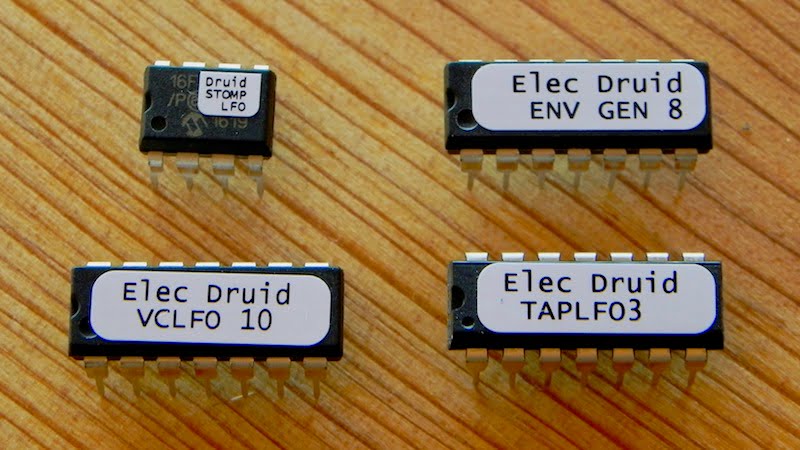 Why bother? What was wrong with the old ones?

Ok, there wasn’t anything much wrong with the old ones, but things have moved on since 2008 when most of them were originally developed – ten years ago already! Most importantly, Microchip have released a newer range of processors, the “enhanced” 16F series chips. The original chips mostly used the 16F684 processor, which could run at 20MHz, but required an external crystal to do so. The newer chips can run at 32MHz, and no longer need a crystal. This saves parts and cost, and frees up a couple of pins for extra features too. This provided the motivation for a comprehensive update.

The new designs increase the size of lookup tables, with data tables moving to 16-bit resolution and including interpolation for super-smooth results. The extra speed moves the sample output rate up to 31.25KHz, so there is an improvement in quality.

The original TAPLFO2D chip was one of our most successful and popular designs, and has inspired a range of exciting and versatile pedal projects.

The TAPLFO3 chip released in February 2018 had a small bug in one of the arithmetic routines that caused it to run slightly slow when compared to the tapped tempo, especially at slower tempos. This has been fixed, and the switch debouncing has also been improved. You can read more about it here if you like.

The StompLFO design is a simplified and lower-cost version of the TapLFO designed to fit in an 8-pin chip. As such, it can replace the typical dual op-amp Schmitt trigger/integrator LFO design that you see in a million stompbox and guitar pedal circuits.

One significant difference from the other LFO designs is that it uses Pulse Density Modulation (PDM) instead of Pulse Width Modulation (PWM) for the output. This enables the output frequency to be much higher (2MHz instead of 10’s of KHz) and that means simple RC filters can smooth the output easily without losing any waveform detail.

The Offset CV and Depth CV interact in an interesting way to allow the chip to produce bipolar or unipolar waveforms of either polarity. Furthermore, in between these extremes, it responds sensibly to increasing depth, making it easy to set up for a given situation.

The diagram above shows the output for a Triangle wave with 0-5V Depth CV (in blue) and various Offset CVs (in red). The graphs show 0V Offset, unipolar positive “bottom up” depth control, 5V Offset unipolar negative “top down” depth control, 2.5V Offset bipolar “middle outwards” depth control,and finally 1.25V, which starts off bipolar until the output runs out of range, and then increases in a unipolar fashion. This allows full depth control without ever going beyond the lower (or upper) limit.

The VCLFO was the first significant PIC project I ever coded. As I learned more and more I was able to add more features and make improvements, which is why it was onto version 9 before it made its public debut!

In the ten years since then, I’ve learned far more, and the new VCLFO10 takes advantage of this and does many things I wouldn’t have thought possible originally, like the random slopes waveform. Some of these new waveforms have already been put to good use in the Benidub DS71 Dub Siren. Pop over to their site and have a listen.

So, what have we added? Here’s the improvements and additions:

I was never entirely happy that I had to have two separate designs to include the looping features I wanted on an envelope generator. The VCADSR 7B had Gate and Trigger inputs, and the LOOPENV 1B replaced the Trigger input with a Mode CV input that allowed selection of two looping modes or standard ADSR behaviour. It would have been possible to move the code to a 20-pin chip, but that would have been overkill.

The new chip allows me to finally solve this problem neatly, and the ENVGEN 8 has both Gate and Trigger inputs, and the Mode CV and looping features of the LoopEnv.

The other major improvement is that it now uses an on-chip 10-bit multiplying DAC. This not only means that the need for post-chip filtering is much reduced or eliminated, but also that the Level CV control can be done without loss of resolution. The output remains at 10 bit resolution at low levels as well as high.

Additionally, the sample output rate has gone up to 31.25KHz, the tables have been improved, and we’ve added a Punch feature which gives your shortest envelopes more thump.

The following diagram shows some example outputs with the three different modes (MODE CV) and the effect of the LIN/EXP selection input to select exponential or linear shapes. The first two modes respond to the GATE and TRIGGER input, but the LFO Looping mode runs constantly irrespective of Gate state.

EnvGen8C fixes a few minor problems. The previous chip wouldn’t go to the release stage correctly if the Mode was switched with the gate still high, and wouldn’t power up correctly if the Gate was high (which is an over-voltage condition – not good!). The new code fixes these annoyances.

As ever, any comments, ideas, or corrections are appreciated. Please get in touch through the contact form. Thanks and enjoy the new chips!

The TAPLFO3, STOMPLFO, VCLFO10, and ENVGEN8,  projects, code and schematics by Tom Wiltshire for Electric Druid are licensed under a Creative Commons Attribution-NonCommercial-ShareAlike 4.0 International License. Here’s the legal stuff.

18 thoughts on “Electric Druid chips: The Next Generation”