Flangers are generally regarded as one of the most complicated pedals to build. A typical design has tons of chips and lots of circuit elements. Flangelicious isn’t like that. 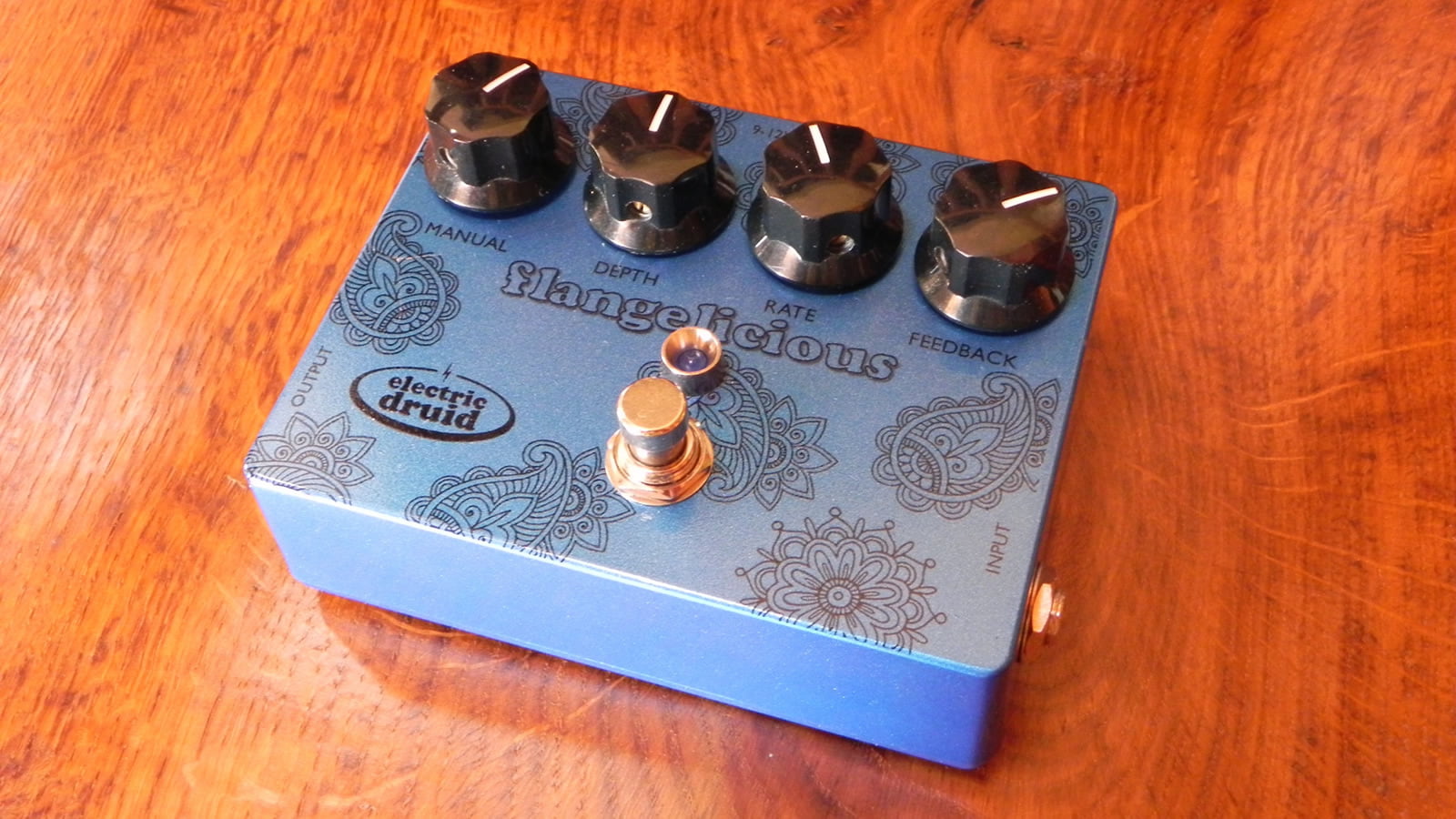 By using a microprocessor to generate an LFO-modulated clock signal directly, we can get rid of a lot of the non-signal path stuff and add features whilst we’re about it. This gives us a much cleaner, simpler design for a flanger with a genuine fully-analog signal path. In fact, it can all be done with just four 8-pin ICs.

To give you a flavour of the sound of the Flangelicious, here’s some sound samples recorded through the unit pictured above (my personal “blue meanie”). These are completely dry guitar samples played through the pedal and recorded into the computer – no amp, no amp modelling, no other effects, nothing. This pedal is the classic four-knob flanger version, equipped with an 1024-stage MN3207.

The Flangelicious comes in two versions: a classic four-knob flanger, and a more experimental multi-waveform flanger. They’re identical apart from the FLANGE chip you use, and both versions can be built with the same PCB with no component changes, and both versions can use either 1024-stage or 256-stage BBDs for different tonalities. You can even build one PCB, and swap FLANGE chips and BBDs back and forth. Let’s have a look at the two versions:

The Druid 4KNOBFLANGE chip offers control for Manual flanger frequency, Depth, Rate, and Resonance (Feedback). The LFO uses a specially shaped waveform which avoids the abrupt changes of a triangle LFO, but avoids the apparently-doing-nothing periods at the peaks of a sine LFO. Manual, Depth, and Rate are all variable using 0-5V control voltages. The chip outputs a biphase clock from 25KHz to 500KHz that can drive MN-series delay lines directly.

The Druid MULTIFLANGE chip includes an LFO with eight waveforms, including a “manual” mode for fixed flanger (“matrix”) filtering effects. Rate, Waveform, and LFO Depth are all variable using 0-5V control voltages. The chip outputs a biphase clock from 25KHz to 500KHz that can drive MN-series delay lines directly.

So why build a Flangelicious rather than something else?

Comparing the Flangelicious schematic with another flanger of your choice will show you the benefit to be gained by rolling up the LFO and voltage-controlled clock into a single chip. In some designs, this part is a third to half the circuit. 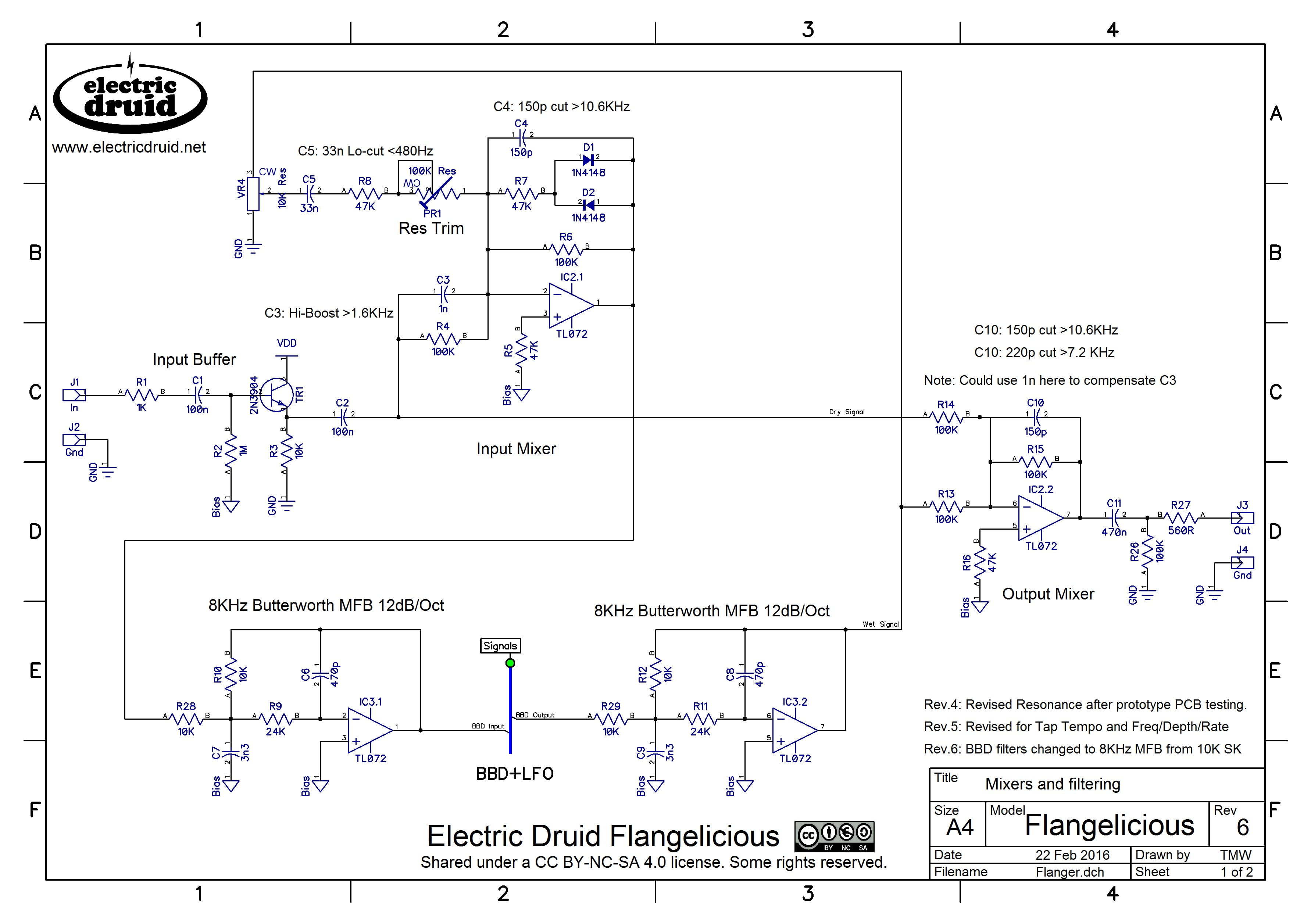 What doesn’t change is the analog signal path – input mixer with feedback for that resonant flanger sound, pre-BBD filter, BBD, post-BBD filter, and output mixer to mix the wet and dry signals to produce the flanging. Luckily for us, this can be done with four op-amps and one BBD chip – just three more 8-pin chips.

In the Flangelicious design, the BBD filtering is deliberately kept fairly light, and set at a frequency to give as much top-end as possible. Flangers love sounds with lots of rich harmonics, so it seems a shame to remove them all. For the same reason, there are tone-shaping components scattered throughout the circuit to boost harmonics but roll-off noise. These are all clearly marked and labelled, and are ideal places to start tweaking to customise the circuit for your perfect tone. 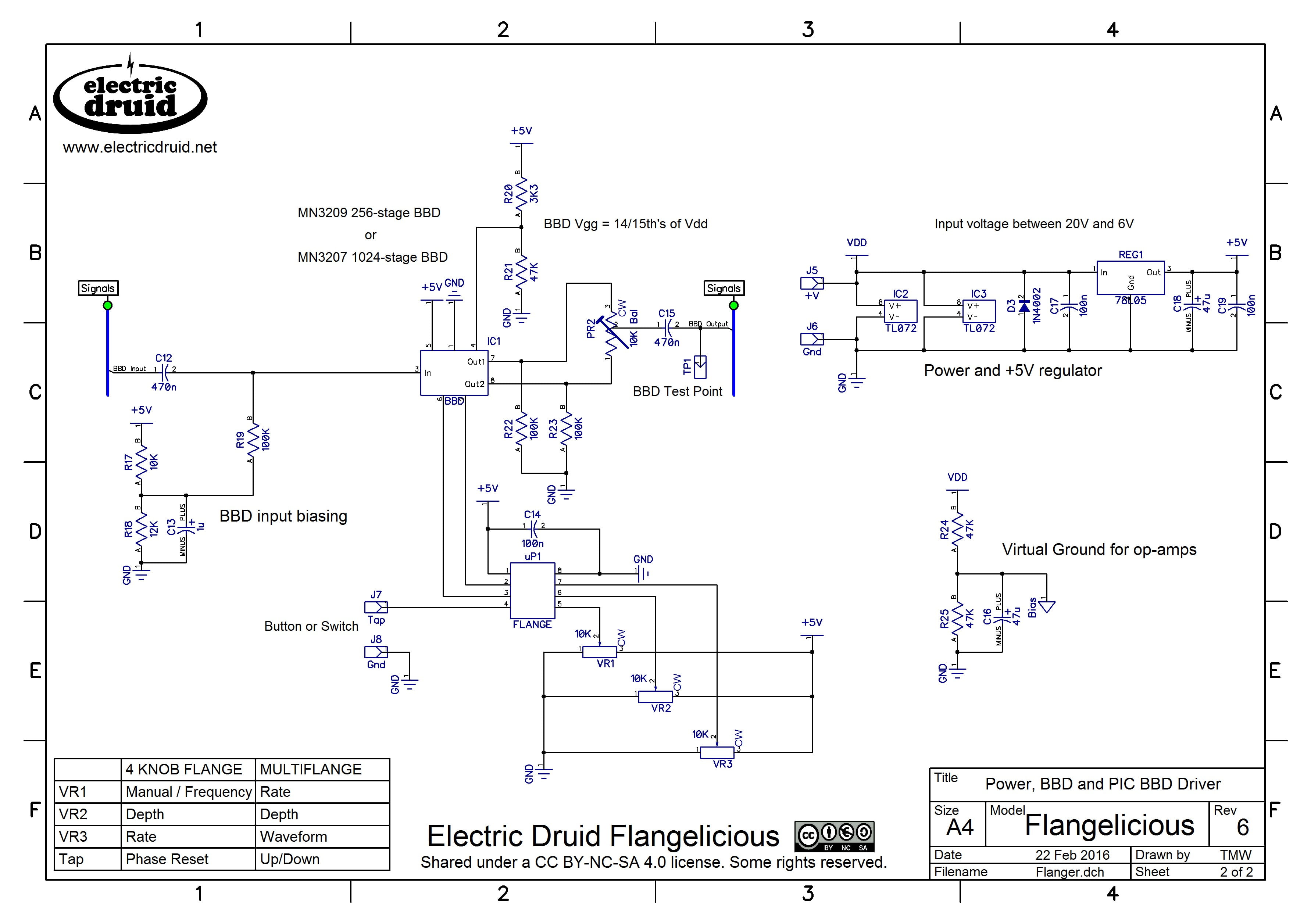 Problems and Possibilities – some personal notes

This project has been one of the most difficult to finish that I’ve worked on. I’ve been playing with it since at least summer 2012, so it’s been nearly four years on the bench. This one has really spent its time in development hell before it escaped to see the light of day. One problem is that the 8-pin chip only offers three analog-to-digital channels (CV inputs). This means that if you want to add a “Waveform” control, you have to drop the usual flanger “Manual” control. In the end, I decided that both options are worthwhile, so that’s what I’m offering. I’d be interested to hear what people think of this decision.

On the positive side, I’m pleased with the code. It’s pretty sophisticated stuff for a 8-pin, 8-bit chip, and it makes full use of the both the features of the newer “Enhanced” 12F1xxx processor and also of all the coding tricks I’ve learned over the last few years. The interrupt routine is kept short, just reading values from ping-pong buffers, and the real work is done using DSP-style block processing as required in the main loop. Without these techniques, there’s no way this chip could pull this off. As it is, every single byte of the extremely limited RAM is used, and the Program Memory is over 95% full too, so even like this, it’s a tight fit. 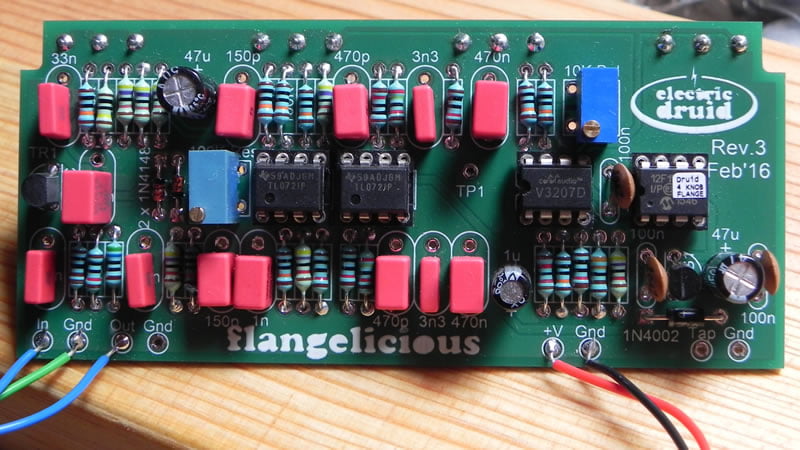 PCBs and programmed chips for this project are available in the shop. You need the Flangelicious PCB + chipset, which includes your choice of the two versions and BBD. You might also need a set of pots for the project. 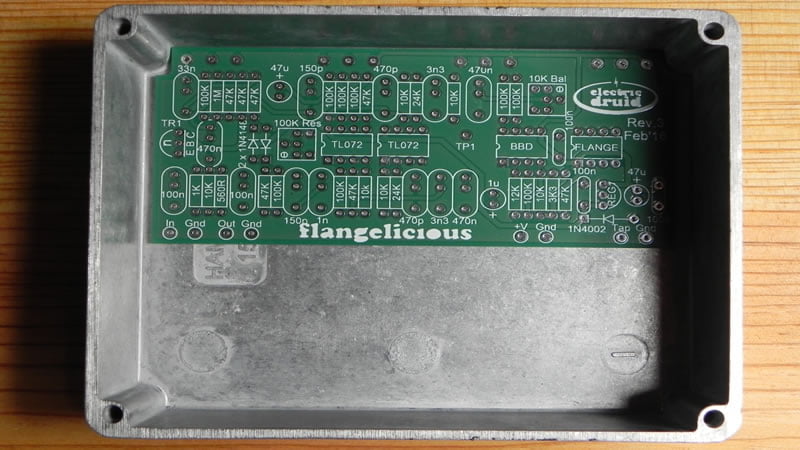 The photo above is the latest Rev.3 PCB, which allows for caps with a lead spacing of either 5mm/0.2″ or 7.5mm/0.3″ to be used to make life easier for DIY. For the build above I used my favourite Wima box film caps, which have a 5mm spacing. Similarly, the PCB layout for the two trimmers can accept the pinouts of several different types of trimmer.

The PCB measures 106x48mm. It is designed to fit into a Hammond 1590BB enclosure in landscape format. The PCB-mounted pots make the build easier.

Pop over to the shop and grab the Flangelicious PCB + chipset, which includes your choice of the two versions and BBD. You might also need a set of pots for the project.

The only document which you’ll really need is the Flangelicious construction guide.

Files common to both versions

The third revision of the PCB for this project is now finished, and I’m confident that it’s about as good as it can be. That needs manufacturing and testing, and then a large batch of boards can be made for the shop.

The new board has improved BBD filtering, and allows for caps with a lead spacing of either 5mm/0.2″ or 7.5mm/0.3″ to be used to make life easier for DIY.

This page has been heavily revised to reflect my decision to have both versions of the chip available. There will further updates shortly as the construction guide and other documents get listed.

Flangelicious by Tom Wiltshire for Electric Druid is licensed under a Creative Commons Attribution-NonCommercial-ShareAlike 4.0 International License. Here’s the legal stuff.