The FilterFX project uses the Druid STOMPLFO to control a 12dB/oct state variable filter. A state variable filter (SVF) is chosen because this filter design offers highpass, bandpass, and lowpass outputs which gives us the greatest range of different effects. The LFO offers eight waveforms, including two random waveforms (one does those crazy sample-and-hold effects like the Maestro FSH-1). 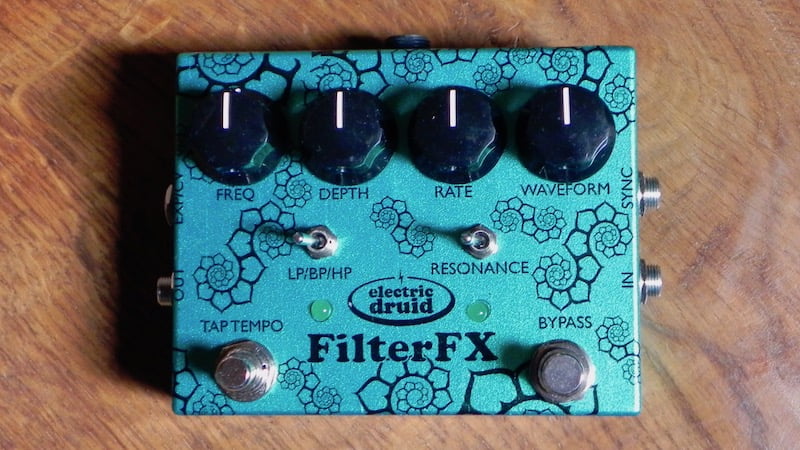 Furthermore, the PCB provides for addition of an expression pedal to allow the filter to be used like a wah pedal (but don’t expect a replacement for your Clyde McCoy – this is a whole different thing!). The expression pedal can be used as well as the LFO modulation, or with Depth at zero, by itself. The Expression pedal input can also be used with a 0-5V CV. There is also a Sync input for the LFO which allows the LFO to be kept in time with an external clock from a sequencer, drum machine, or another LFO. In many ways, this is a modular synth filter in a stompbox, and it can sound like it, too – there’s a distinctively “synthy” element to the sound with this one.

If you want to cut to the chase and build one, just skip down to the “What do I need to build one?” section.

To give you a flavour of the sound of the FilterFX, here’s some sound samples recorded through the unit pictured above. These are completely dry guitar samples played through the pedal and recorded into the computer – no amp, no amp modelling, no other effects, nothing.

First, a basic funky riff with some lowpass autowah:

Next, something similar, but with highpass filtering taking all the fundamental out (mostly with the Ramp Up waveform):

Some rhythm guitar with lowpass and then highpass filtering using the Random Levels “sample and hold” waveform. This can get pretty abstract:

Finally, some strumming and playing about with the different waveforms available and fiddling with the Rate and Depth knobs a bit. This is wild filter mayhem:

<COMING SOON! EXAMPLES WITH EXPRESSION PEDAL AND WITH SYNC’D SYNTH!!>

The SVF filter is controlled by a Druid STOMPLFO chip which has eight waveforms, including two unusual random waves for less repetitive filtering effects. Rate, Waveform, and LFO Depth are all variable using 0-5V control voltages.

The LFO also offers tap tempo to set the speed which is very useful with a rhythmic effect like this one, and there is a provision for a Sync input which can accept clock pulse from a sequencer, drum machine, synth, or other LFO to keep the FilterFX in time with other gear.

So how does it work then?

The schematic is pretty straight-forward, and will be familiar to people who’ve studied state-variable filters like the Mutron. At the input we have a simple unity-gain buffer IC1.1 to provide a good input impedance and prevent tone-suck. Then IC1.2 acts as a differential mixer, mixing the input with the two feedback signals from the next two stages. IC2.1 and IC2.2 are op-amp integrator stages, with their frequency controlled by the two vactrols. Basically what happens is that the vactrols control the rate at which the two caps C2 and C3 charge up. By the magic of analog computing, the result of all this is that we have lowpass, bandpass, and highpass outputs available from the two integrators and the mixer stage. The Mode switch selects between them and the signal is taken to the output. Since the audio path is pretty simple and doesn’t include huge gain (except for perhaps on the highest resonance setting) the pedal is quiet. 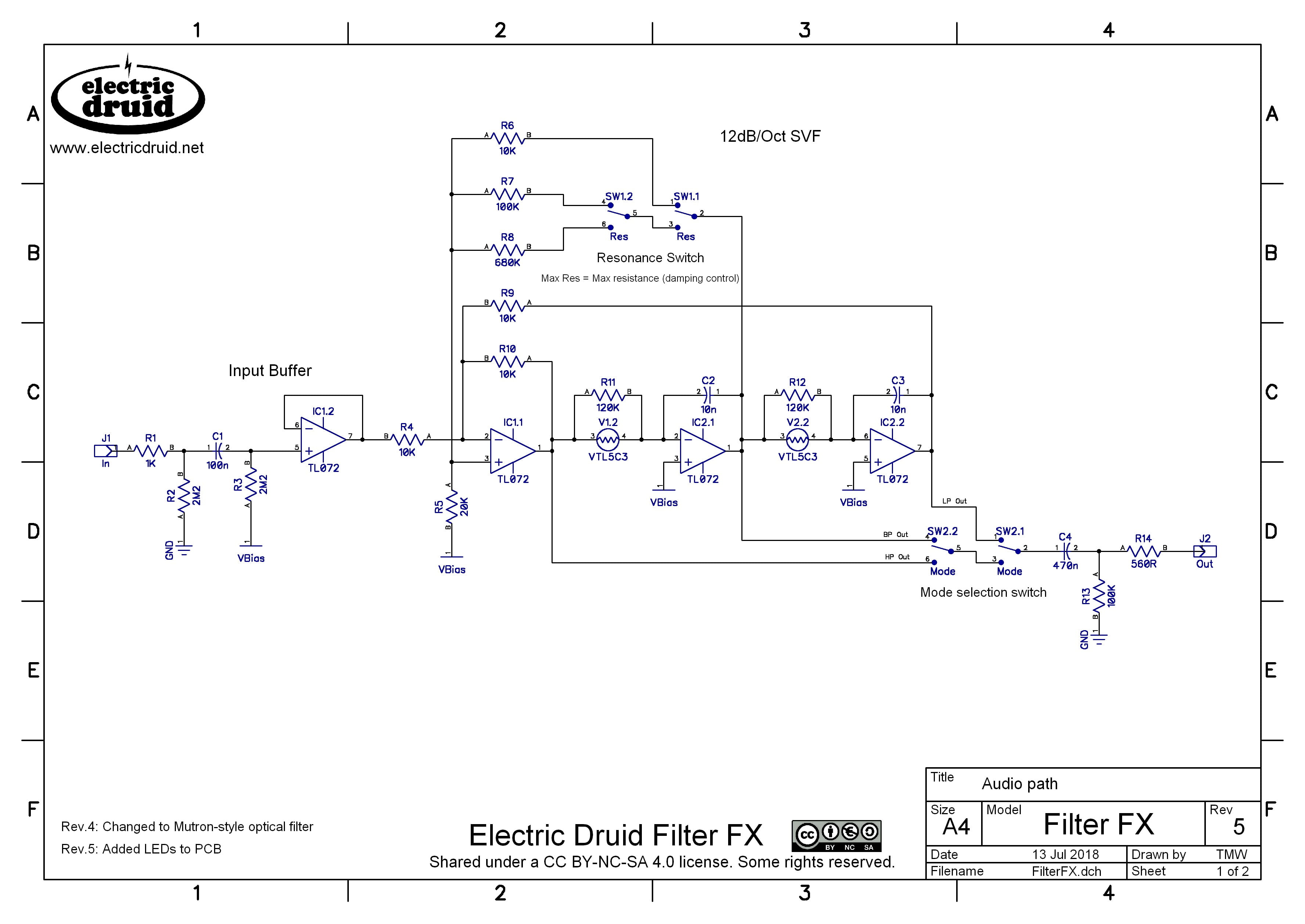 The second page of the schematic is dedicated to the LFO and the power circuit. The LFO is very simple since all the hard work is done by the STOMPLFO firmware. The PDM (pulse) output from the chip is used to drive the two vactrols and the LFO LED. The Tap Tempo foot switch simply grounds pin 4 of the STOMPLFO, and the optional Sync input allows incoming clock pulses to do the same thing, whilst protecting the chip from negative or over-voltage situations.

The power circuit is standard stuff for a stompbox, with a series diode D1 to protect against reversed power connections, and R23/C6 to provide some power smoothing to prevent hum. REG1 gives us a stable 5V supply for the STOMPLFO processor. 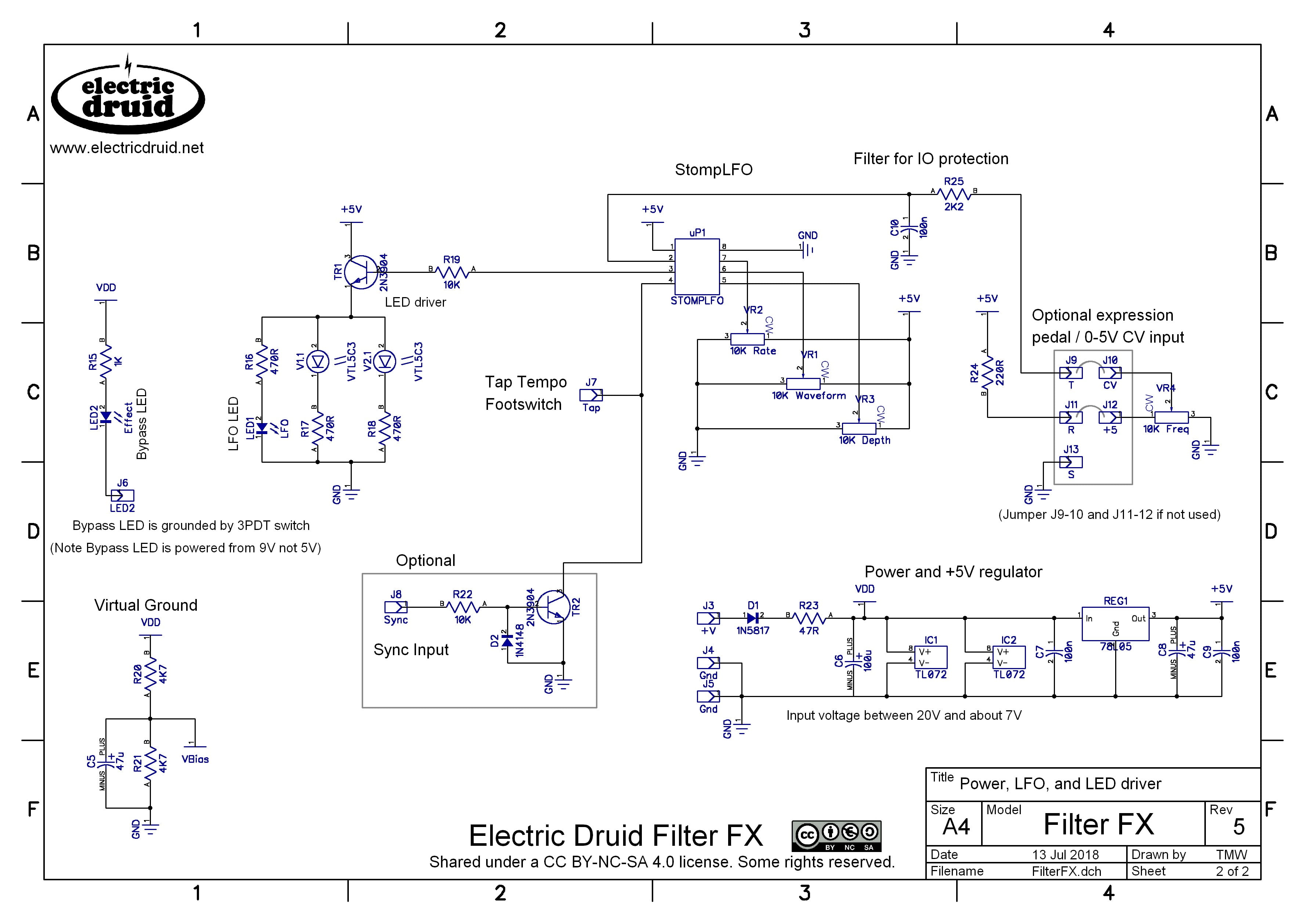 There was a thread on DIYStompboxes about the development of the FIlterFX pedal a while ago if you’re interested and want to see what the prototype looked like. The final unit (fully tricked out with Sync and Expression/CV inputs) looks like this: 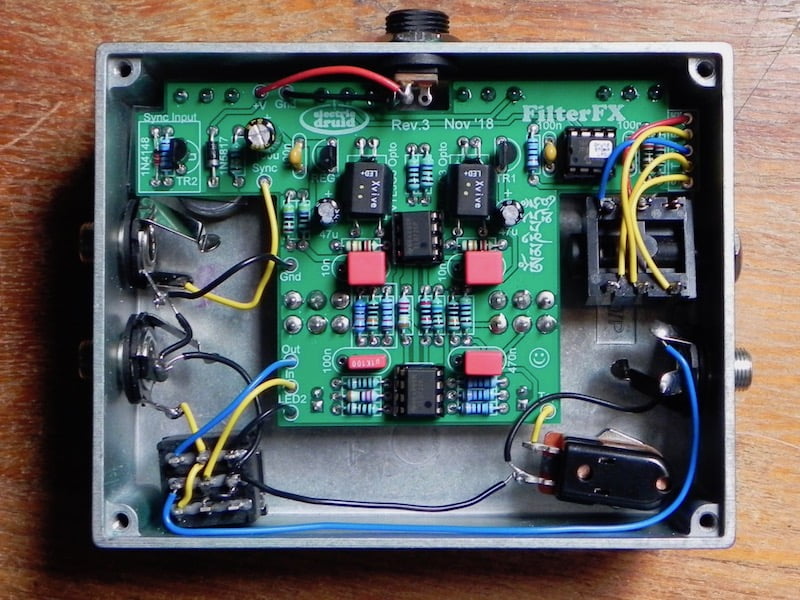 Ok, so what do I need to build one? PCBs and parts for this project

Pop over to the shop and grab the FilterFX PCB+Parts set, and the FilterFX pot set. The first includes the PCB, the StompLFO, the two unusual three-position switches, and two VTL5C3 vactrols. The second is a full set of pots for the project.

The most important document you’ll need is the FilterFX construction guide. The Enclosure drilling template comes in handy later on too.

Unfortunately the large amount of hardware and special parts required for this project (two footswitches, up to four jacks, two toggle switches, four pots, and a couple of costly vactrols) means it’s not a cheap build, but you probably won’t find many commercial alternatives with similar features for much less either. At least we can bulk-buy the parts which helps.

The photo is the latest Rev.3 PCB, which allows for caps with a lead spacing of either 5mm/0.2″ or 7.5mm/0.3″ to be used to make life easier for DIY. For the build above I used my favourite Wima box film caps, which have a 5mm spacing.

The PCB measures 112x68mm. It is designed to fit into a Hammond 1590BB enclosure in landscape format. The PCB-mounted pots make the build easier.

Since the code is provided above if you’re familiar with a bit of PIC programming you can tweak the waveforms or the frequency range for your own purposes.

As ever, any feedback about the project is appreciated. Please get in touch on the contact page.

FilterFX by Tom Wiltshire for Electric Druid is licensed under a Creative Commons Attribution-NonCommercial-ShareAlike 4.0 International License. Here’s the legal stuff.