Last time we looked at reconfigurable filters, filters that include switches to rearrange parts of the circuit during normal use. However, that’s not the only way to produce different responses from a single filter circuit. This time, we’ll look at another approach: pole mixing.

“Pole mixing”? It sounds like stirring a cake with a broom handle…

Either that or a DJ doing a set up a flagstaff, right? Nope!

You’ll have heard people talking about filter “poles”. Without going into the maths of it, this is related to the number of 6dB/oct stages they have. A 1-pole filter has one stage, a 2-pole filter has two stages, etc etc. Most classic synth filters are 4-pole filters, although 2-pole filters have had their proponents, notably Oberheim.

Let’s say we’ve built a four-pole lowpass synth filter, fat and juicy and with enough funk to make your punks daft. It could be based on OTAs, or VCAs, or it could be a transistor ladder filter. Usually you’d take the output of the filter from the output of that final fourth stage. But that’s not the only option. You don’t have to. You could instead take the output from the first, second or third stage. If you did, you’d get a 1-pole, a 2-pole, and a 3-pole response to choose from. You could even take the output straight from the input, and thereby provide a way to bypass the filter.

Wow! So how does that work?

To give a simple example, we can imagine making a highpass filter by starting with the input signal and then taking away a lowpass filtered version of that signal. What’s left is the bit that the lowpass filter removed – the high frequencies.

This is a simplification, but it explains the idea. In a similar way, by taking a lowpass response and removing another, we can make a bandpass response.

More complex responses need more complicated mixing, and a careful balance of the various outputs, but the principle is the same.

The first commercial synth I ever saw with a pole-mixing filter was the Oberheim Matrix-12 / Xpander. I can’t find out accurately which of these synths hit the market first, but they’re basically different versions of the same thing, so it doesn’t matter much. The filter was a revelation to the analog synth world of the mid 1980s. Never before had an analog polysynth had a filter that could produce 15 different filter responses. There have been very few since that do.

The Matrix/Xpander uses the filter in the CEM3372 synth voicing chip, and cleverly hacks the chip, tapping the signals from each stage’s filter capacitor with a buffer to get outputs from each pole. Note that the buffers alternate between non-inverting and inverting. This is because we need to be able to subtract poles from the mixture as well as add them.

What a great idea! Does anyone build a synth with a pole-mixing filter these days?

The same idea appeared in the Mutable Instruments Shruthi 4-pole Mission filter board back in 2015. It has a filter core based on the V2164. It uses the same tactic as the original Xpander, using a an eight-way switch to select resistor combinations, coupled with a switch to disable the first filter stage. Mutable Instruments don’t build Shruthi’s any more, but the design files are available if you want to have a go.

The Intellijel Polaris Eurorack module is also based on the V2164, but includes more resistor combinations for a total of 27 different responses.

At the other end of the synth market, the same idea appeared again more recently in the Modal Electronics 008 synth. Similarly, this uses eight selectable resistor sets and a switchable first stage – it is possible to deduce this from the selection of responses that it offers. Oberheim’s idea from 1984 has survived into top end synths in 2017!

What responses can we get from a pole-mixing filter?

The usual way to describe the responses in a filter like this is to describe the weightings of the different outputs. The input is first, followed by the 1-pole output, then the 2-pole, 3-pole, and finally the 4-pole. These are sometimes labelled A, B, C, D, and E.

Note that because the stages are inverting, the 1-pole (6dB/oct) and 3-pole (18dB/oct) outputs are inverted with respect to the input. It is important for the mixing that the inputs to the mixer alternate between non-inverted and inverted (e.g. we add one pole, then subtract the next, add the next, and so on). Since this is achieved by using inverting stages, or adding inverting buffers to some stages (as in the Xpander design), these inversions are ignored in the weightings below. It boils down to “the second and fourth columns are inverted”.

These are the simplest, since we can just take the output from each filter stage, and no mixing is required.

These are proper mixed responses that need careful matching of the outputs. If the outputs are not well matched, the cancellation of the signal in the stop band will not be good, and you’ll have a highpass filter with some “leakage” of low frequencies. For musical use, this may well not be that important.

It’s also possible to have asymmetric bandpass responses, with unequal slopes on the two sides.

A 12dB notch filter is formed by adding the 12dB lowpass response to a 12dB highpass.

Presumably you could do the same thing with a 18dB highpass and 18dB Lowpass, but I haven’t confirmed it:

There are many other possible notch responses. For example, you can create a notch by mixing an allpass response with the input signal (the classic phaser).

It is also possible to get allpass responses from the filter core.

Since an allpass filter doesn’t actually remove anything, these responses are underwhelming on their own. However, adding the allpass output to the input causes phase cancellation and creates notches that we can hear. This changes these responses into a phaser.

These responses have all had {1,0,0,0,0} added and then been simplified by dividing by two.

Ok, so what filter responses did the Oberheim Xpander/Matrix12 include?

It included eight basic responses, which could then be altered by disconnecting the first stage. This effectively moves the coefficients left one place. The responses from the Xpander service manual are:

With the first stage switched on

With the first stage switched off

Note that the fifth response with the first stage switched off is a copy of the third response with it switched on (12dB HP + 6dB  LP). This is why the Xpander/Matrix12 had 15 responses instead of the 16 you’d expect – one is a duplicate.

There are two parts to a pole-mixing filter, the 4-pole filter core itself, and then the pole mixing. Since we need alternate positive and negative outputs, it helps if the filter stages are inverting. Luckily for us, this is easy to arrange with either the V2164 or the AS3320. The two filters are below. Both of them share the same mixing section.

The best way to set the V2164/AS2164 as a filter is to use the VCA to control the cutoff frequency of an op-amp integrator. Since these integrators are inverting, our filter stage is inverting. 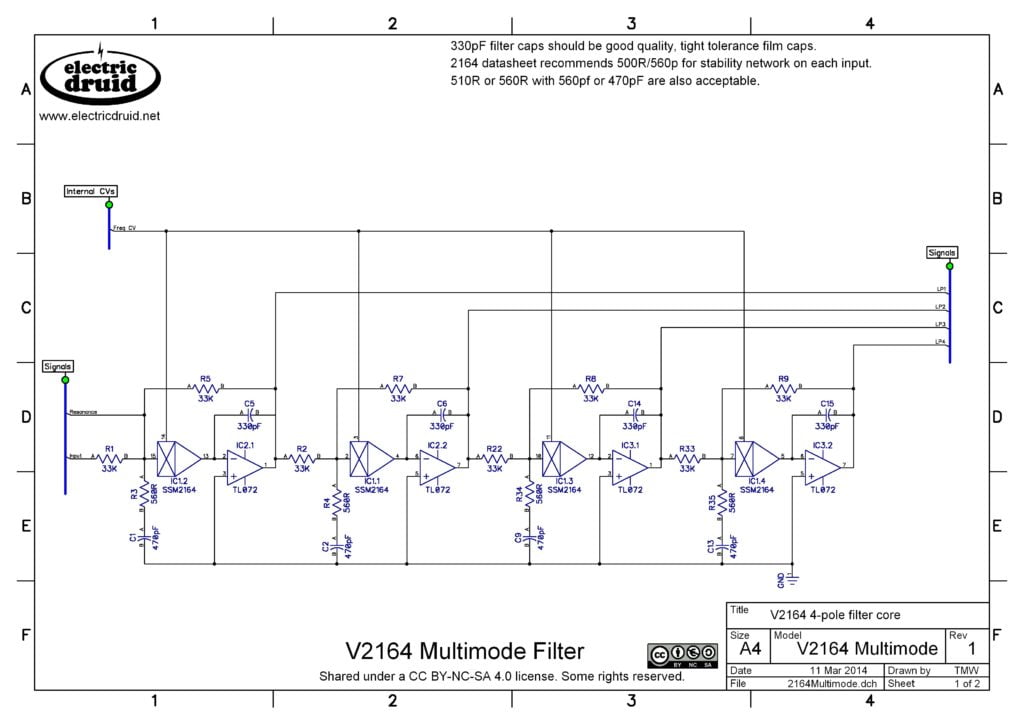 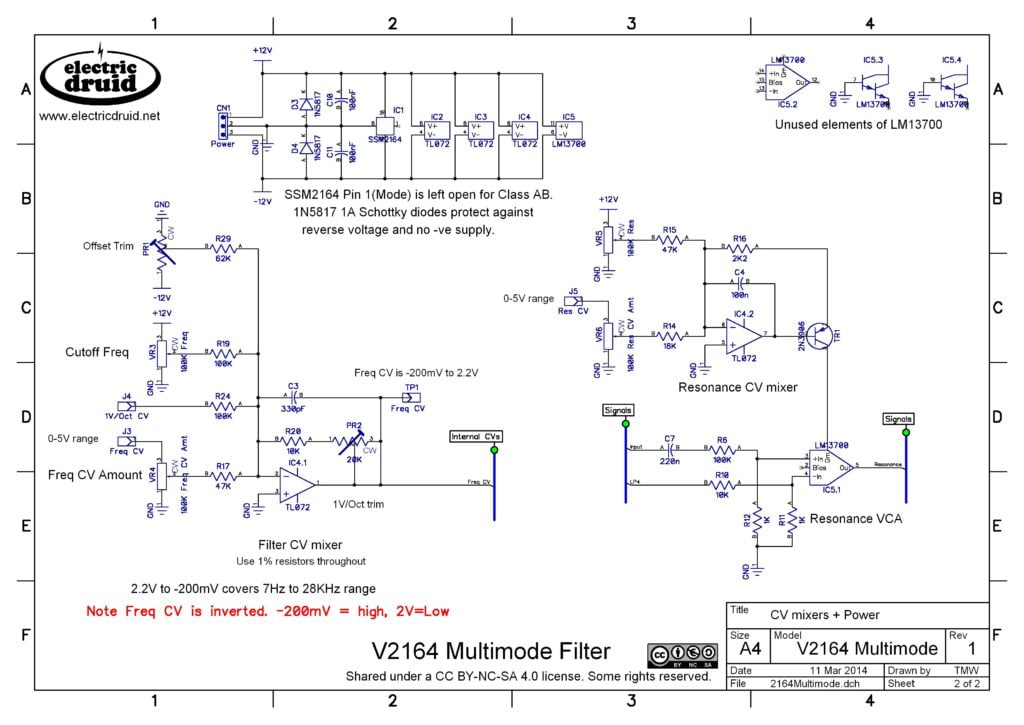 This design is based on Mutable Instrument’s Shruthi 4-pole Mission filter mentioned above. The resonance CV mixer has been altered to allow external CV inputs and add some further protection.

We can simplify the circuit even further by using the AS3320, which doesn’t need external buffers, and includes voltage-controlled resonance. Furthermore, the stages inside the chip are inverting, so we don’t need to add anything. This makes a fantastically simple filter core for a very powerful filter.

About the only downside of the chip for this use is the fact that the filter stages have a heavy DC bias (6.5V) this makes large DC-blocking caps necessary on the stage outputs. It’d be nice if these weren’t required. Still, it’s not a big thing. 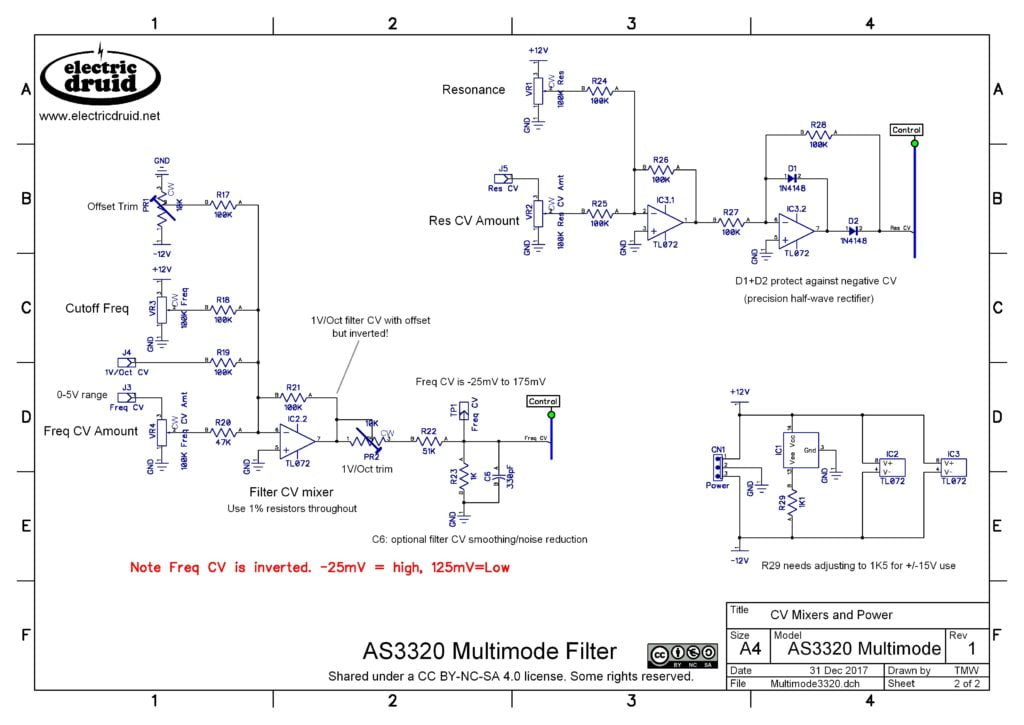 This mixer takes the five outputs (Input, LP1, LP2, LP3, LP4) marked on the above schematics and provides many different responses. 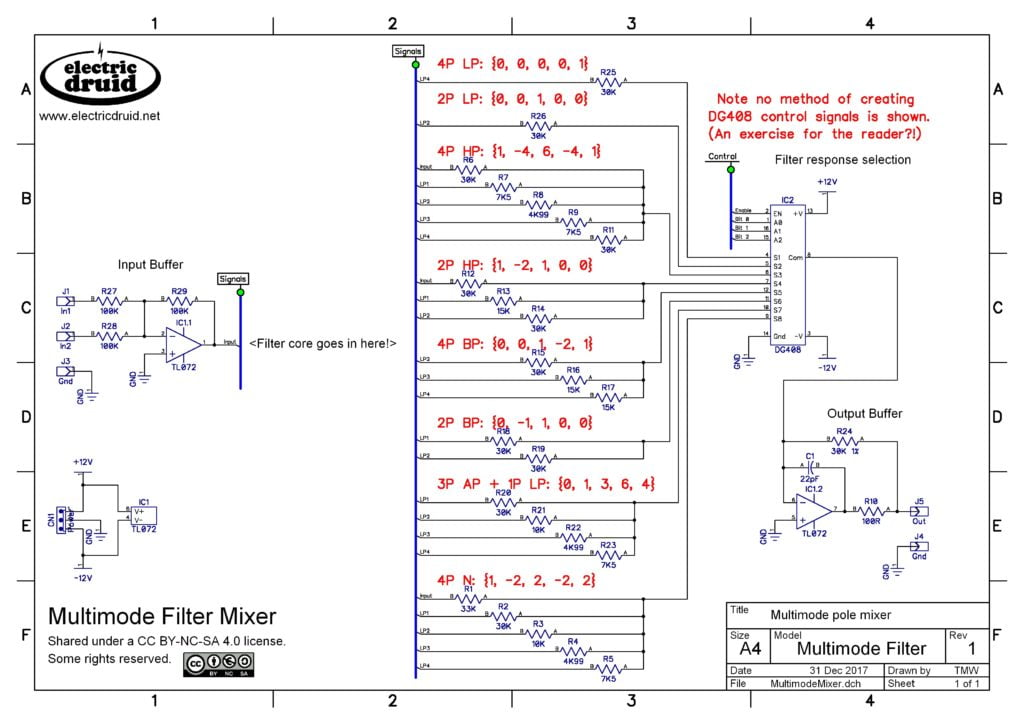 The pole mixer is a standard inverting op-amp audio mixer circuit. The only complicated part of a pole mixer circuit like this is choosing the resistor values so that it is possible to get other values that give the required gains. The gains need to be accurate, so 1% resistors or better must be used. If you choose E24 series values, you will probably need to combine values to get accurate results, so many pole-mixing designs use E48 or E96 values for at least some cases.

All of the basic lowpass, highness, bandpass, notch, and all pass responses listed above can be done with only five coefficient (gain) values: 1, 2, 3, 4, and 6. A good design should make these values easy to find. The only value in the E24 series that comes close is 30K, which gives 15K for x2, 10K for x3, 7.5K for x4 and 5K for x6. All of these except 5K are standard E24 values. For 5K, the closest is 4.99K from the E96 series. More complex responses including some notches and higher-order all pass filters require more exact values which will be beyond the E24 series whatever you do.

There is an alternative approach, if board space is less of an issue. If we choose a 100K resistor as our basic value, paralleling two 100K resistors gives us a 50K value, and paralleling three gives us 33.3K. We can carry on adding more to get other multiplication factors. So far, I’ve never seen a circuit which took this approach, but it should work and might make sense with resistor arrays.

Note that it is possible to use an analog switch IC to select between different resistor sets as demonstrated in the schematic above, but it is also possible to use multiple mixers to provide various outputs simultaneously.

I’d previously thought that the Oberheim Matrix/Xpander filter discussed above was the earliest commercial pole-mixing filter, but Steve Ridley recently brought the Siel Mono synth to my attention (Thanks Steve!). This synth came out in 1979/1980, so it predates the Oberheim by several years. It uses LM13600 dual OTAs for the filter core, and uses pole-mixing to provide highpass and bandpass outputs as well as the typical lowpass.

Bernie Hutchin’s Electronotes discussed the concept in the January 1978 issue, so the idea was clearly in circulation in the late-70s/early-80s.

David Moylan has done a great simulation over on the Expedition Electronics webpage where you can play around with the coefficient values and see the resulting filter responses in realtime. Really handy!

The Xpander service manual is where I first saw this technique described.

However, Oberheim weren’t the first. They probably read about it in Bernie Hutchins’ Electronotes newsletter!:

Here’s the earliest-known commercial application of pole-mixing, in the Siel Mono. It’s also not a bad design if you want a nice vintage 4-pole OTA filter. It could be built with the LM13700 with no problems:

Sound Semiconductor have also recently released an extremely good application note which covers many filter-building techniques, including this one. One interesting twist they give it is to use pole-mixed bandpass responses for the feedback to avoid the “passband droop” effect at high resonance – a nice trick!

There’s also an excellent explanation over on the Mutable Instruments site:

As usual, if you spot any errors, get in touch, or comment below.