The Boss MT-2 Metal Zone distortion pedal is one of the most complex drive pedals there is, and has probably the most sophisticated (and least understood!) tone control circuit on any mass-market pedal. It’s also quite a divisive beast, with some loving it, and others hating it. It’s a great pedal for modifications – easily available, cheap, and rugged. This article is a technical analysis of the different stages in the pedal, finding out what each part does to the tone. This process should suggest various ways you can tweak it to get your own high-gain version of heaven.

First, take a look at the schematic. We’ll break it down into functional blocks, and to keep things reasonably simple, we’ll ignore the power circuitry and the typical Boss noiseless FET-bypass. That’s another thing for another day.

Ok, reading from top-left to bottom-right, we’ve got the input buffer, the pre-distortion tone shaping circuit, the gain stage and clipping diodes, the post-distortion tone shaping circuit, the High and Low tone controls, and the sweepable Mid tone control. All this is finished off with an output buffer. See, I told you it was complicated! Let’s have a look at those parts one by one.

This is just a simple stage to get us warmed up! It’s a FET buffer. The input impedance is largely down to R058, so we’ve got 1MOhm. It’s connected to “black up arrow” which is the symbol they’re using for the 4.5V midpoint voltage. C042/47n is a AC-coupling capacitor (or “DC blocking”, whichever way you want to see it). 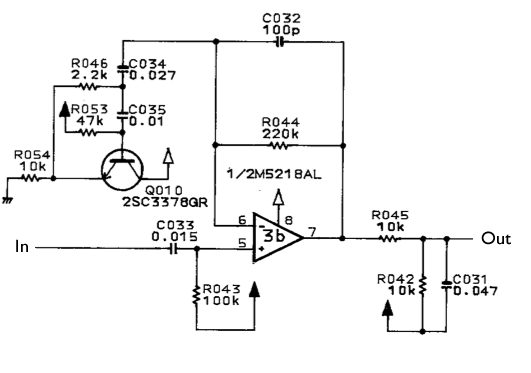 Now things start to get interesting! Our input signal comes in through C033/15n to the +ve input of the op-amp, which is biased to the midpoint voltage with R043/100K. These two components form a highpass filter with a cutoff at 106Hz, just enough to reduce any mains hum a little without heavily affecting the input signal. Op-amp 3b is a non-inverting amplifier, but instead of a simple potential divider to set the amount of feedback to the negative input (and hence the gain) there’s a lot of extra stuff and a transistor. The feedback resistor R044/220K is simple enough, and in combination with C032/100p, it gives a gentle 6dB roll off of high frequencies above 7.2KHz, which is about the top of the guitar’s range. You can check this 220K/100p calculation on the RC filter calculator page.

The “extra stuff” is a transistor-based gyrator stage. As usual, Rod Elliot has the best page about gyrator filters. Here it acts as a bandpass filter, centred around 1KHz. Either side of this, the gain starts to drop off. Additionally, R045 and R042 form a 10K/10K potential divider on the output of the stage, and R045 and C031 form a lowpass filter with a cutoff at around 340Hz. This rolls off the highs even more, and helps smooth things out a little bit.

This stage gives a notable “mid hump”. If you try putting a wah pedal in front of a distortion pedal, you’ll find you can alter the tone of the distortion by moving the wah. This is similar to what’s going on here – a peak in the frequency response is being created to boost mid-range and shape the sound of the distortion. 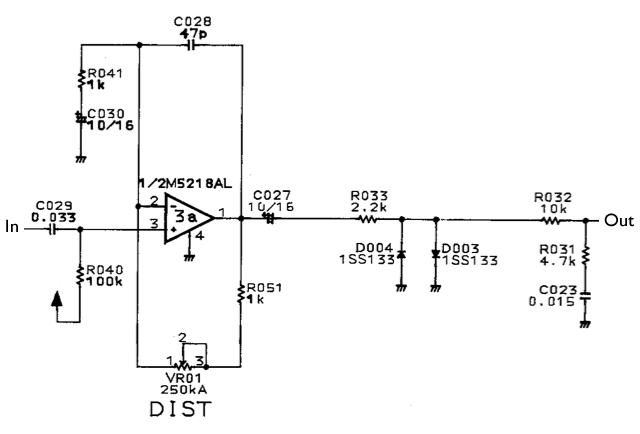 We start the next stage with an AC-coupling cap C029/33n. With R040/100K, that input cap forms a high-pass filter at 48Hz, plenty low enough to get all guitar tones. The gain is provided by another non-inverting op-amp, 3a. R051 and VR1 give a minimum and maximum gain of x2 and x252. C028/47p is small enough that even with VR01 at maximum resistance, it only rolls off the top end above 13KHz. Its role here is to limit gain for noise outside the audio band. Note that with a typical guitar input of around 1Vpp, there’s no way an op-amp running on 9V can provide an output of 252V when the gain is turned up to full. Instead the signal will get heavily clipped by the op-amp as it hits the power rails, usually at around 8Vpp for typical op-amps. Since different op-amps handle this differently, the choice of op-amp here might have some bearing on the tone, although given everything else that happens to our poor abused input signal, I doubt it’s a major factor. Following the gain stage is another AC-coupling cap and then a pair of clipping diodes. These are common-or-garden silicon diodes, so they clip the signal to +/-0.6V or 0.7V. That’s another heavy clip for our 8Vpp output from the gain stage. R033/2K2 helps to soften the edges of the clipping a little, as described here.

Looked at like this, the circuit is really a two-stage clipping circuit. Even at minimum gain (x2) there’ll be just enough signal to make the diodes conduct, so we can expect a light crunch. As the gain gets up to x8 or more, the op-amp will start to clip too, and its boosted output will be clipped hard by the diodes. And that gain control doesn’t just go to 11, it goes way up to 252. By that point, all that is left is a very heavily clipped signal.

After the diodes, we’ve got our raw distortion, with as much gain and crunch as we could possibly want. From here on, it’s a question of trying to sculpt that sound into our final tone. The first step in that process is the potential divider/ lowpass filter created by R032, R031, and C023.The filter gives a soft lowpass action and removes some treble. The maximum effect of this filter is only -10dB, so it’s not a huge effect.

This stage shouldn’t be quite so unfamiliar this time around. It’s a more sophisticated version of the pre-distortion tone shaping circuit. This one has two gyrators, and therefore two peaks in the frequency response. We can plug the component values into the everso-helpful Bandpass EQ calculator over on Muzique.com and we get the following:

Note the extremely high Q figure for the right-hand gyrator. This implies a bandwidth of 1/10th of an octave. In practice, the transistor’s gain isn’t sufficient to achieve such a boosted response. It may have been designed to allow for some slack from the transistor. Plotting the frequency response of the stage in LTSpice is instructive, and gives a reasonable result.

The final op-amp 4a is a simple unity-gain inverting stage. To be honest, I’m not sure what this is doing here. Perhaps Boss were concerned that the pedal should be non-inverting overall (is it? I haven’t checked) or perhaps they had one op-amp left over. Suffice to say, it doesn’t add anything, just flips the signal the other way up. 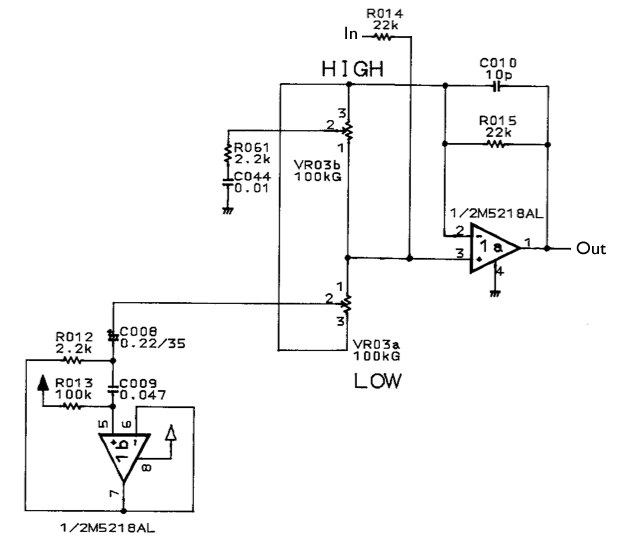 Now we get onto the tone controls. The first part of the tone control circuit is the High and Low controls. This is done with a pair of cut/boost-type controls. This circuit is related to the op-amp differential amplifier, and with the controls in the centre, the signals to the +ve and -ve inputs of the op-amp cancel out and there’s no overall effect. As the controls are moved away from the centre position, either the positive or the negative signal will dominate, and there’s a resulting cut or boost. This circuit can give +/-20dB, so it’s a substantial cut or boost too.

The High control is simpler, being just a resistor and a capacitor to make a high shelving. The Low control is another gyrator, this time with an op-amp as the active element rather than a transistor.

The Low tone control has the same 100Hz centre frequency as one of the post-distortion tone shaping gyrators, but this time it’s got a much lower Q, giving it a much wider, shallower action. It’s more of a broad brush, and not such a “peaky” sound. 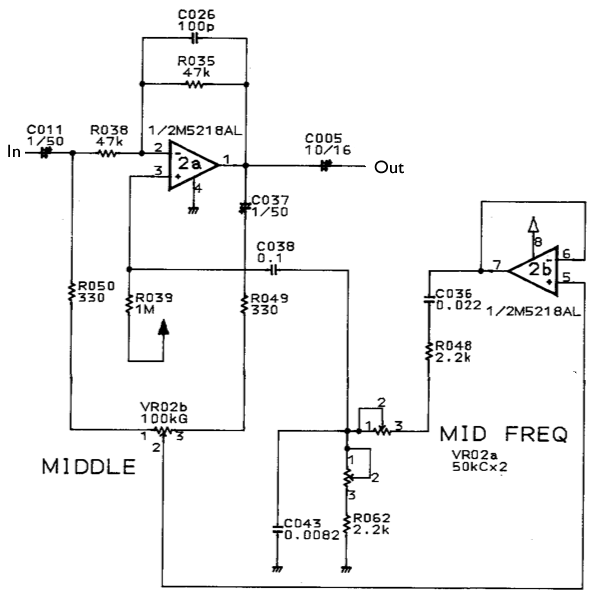 The second part of the tone control circuit is the sweepable Mid tone control. It isn’t a fully parametric EQ because although you can change the amount of cut or boost and sweep the frequency, you can’t change the “Q factor”, which determines the bandwidth, or how wide the effect of the stage is. We can call it a “semi-parametric EQ” if you like, but “Sweepable Mid control” is just as good.

Boss managed to keep the Q response constant across the range of the sweep. This is probably why they chose the Wien-bridge circuit rather than use another gyrator. It’s hard to keep Q within reasonable limits when you make the gyrator’s frequency variable.

The “Mid” control gives a cut or boost of 15dB. Note that there is a slight asymmetry between boost and cut. The “Mid Freq” control goes from 240Hz in both cases, but when boosted the top end is 4.7KHz, whereas when cut it is 6.3KHz.

We should also note that the “Mid Freq” control response is a long way from linear. The plotted values above are 0, 5K, 10K, 30K and 50K for the Mid Freq dual-gang pot. If you’re building one, a reverse-log taper would perhaps give the best response. Good luck finding a dual-gang reverse log pot – it’s possible, but not easy.

These tone controls are one of the reasons why some people hate this pedal, and why others love it. The four controls (High, Low, Mid, Mid Freq) give you a huge tonal variety to explore, but also make it difficult to find your perfect setting unless you know from the outset what you want. This is a pedal which maybe doesn’t reward random knob twiddling. It’s a bit too complicated for that. 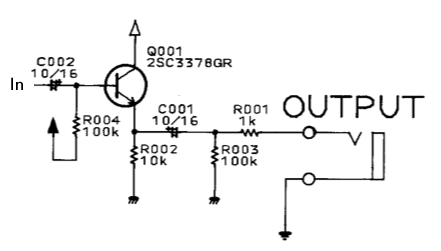 Phew! We’ve finally made it to here! Another simple one to finish off. This is a simple emitter follower buffer. R004/100K ties the base to the bias voltage of 4.5V. C002/10μF AC-couples the input, and C001/10μF does the same for the output. R003/100K ties the output to ground to prevent (ok, “reduce”) thumps when you plug in, and R001/1K protects the output against shorts and people getting the input and output mixed up.

Why does the Metal Zone sound like it does?

I’ve already commented on the sophistication of the MT-2 Metal Zone’s EQ, and it does give you a lot of options. But it’s not the only thing defining the sound of the pedal. The pre- and post-distortion tone shaping circuits have a massive influence, and beyond what you can tweak on the EQ, they are the sound of the pedal. Swapping the gain op-amp or changing the clipping diodes might have a subtle effect, but changing the frequency-determining components in those two tone shaping stages will give much more radical results. Whereas on many other distortion or overdrive pedals, the op-amp used or the clipping diodes have a major influence on the final output, in the MT-2 it’s really all about frequency response. It’s heavily shaped every step of the way, and those frequency responses determine the sound of the pedal, much more than diode choice ever would.

That initial mid-hump before the distortion, high-gain double clipping, and then the scooped-mid response after it give the pedal its tone. Add to that the high degree of tweakability that comes from the powerful EQ and you’ve got a successful pedal.

And that is the gory detail of the guts of the MT-2 Metal Zone. Thanks for reading and I hope it inspires you to have a tweak at this remarkable pedal, or maybe design your own with a little inspiration from those clever Boss engineers of the 1980’s.

This article owes a lot to the extremely helpful folks over at DIYStompboxes.com, where I raised my questions. Thanks to Paul R in particular for his help in understanding the post-distortion tone shaping.