What’s a “compander”? It’s a simple way to make your circuit quieter! So how does it work? Let’s say we’ve got a fairly noisy effect, like a BBD. The basic idea is that you make quiet signals louder before you put them through the effect, and then you make them quiet again after the effect, and thereby make the noise quieter too. And that’s the clever bit!

“Compander” is a compound of “Compressor” and “Expander”, since those are the two parts of that process. The compressor is the part that makes quiet signals louder (“compresses the dynamic range” in the jargon) and then the expander reverses the process and makes them quiet again (expands the dynamic range). Obviously it’s important that the two stages cancel each other out if we want the overall dynamics of the signal not to get mangled. 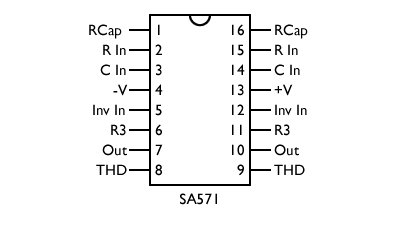 The SA571 chip provides two sets of the building blocks you need to build compressors and expanders, so you can build a companding circuit with just one chip. The two halves of the chip are identical copies of each other (apart from the power pins on pin 4 and pin 13, obviously) so you can use either half for either job. 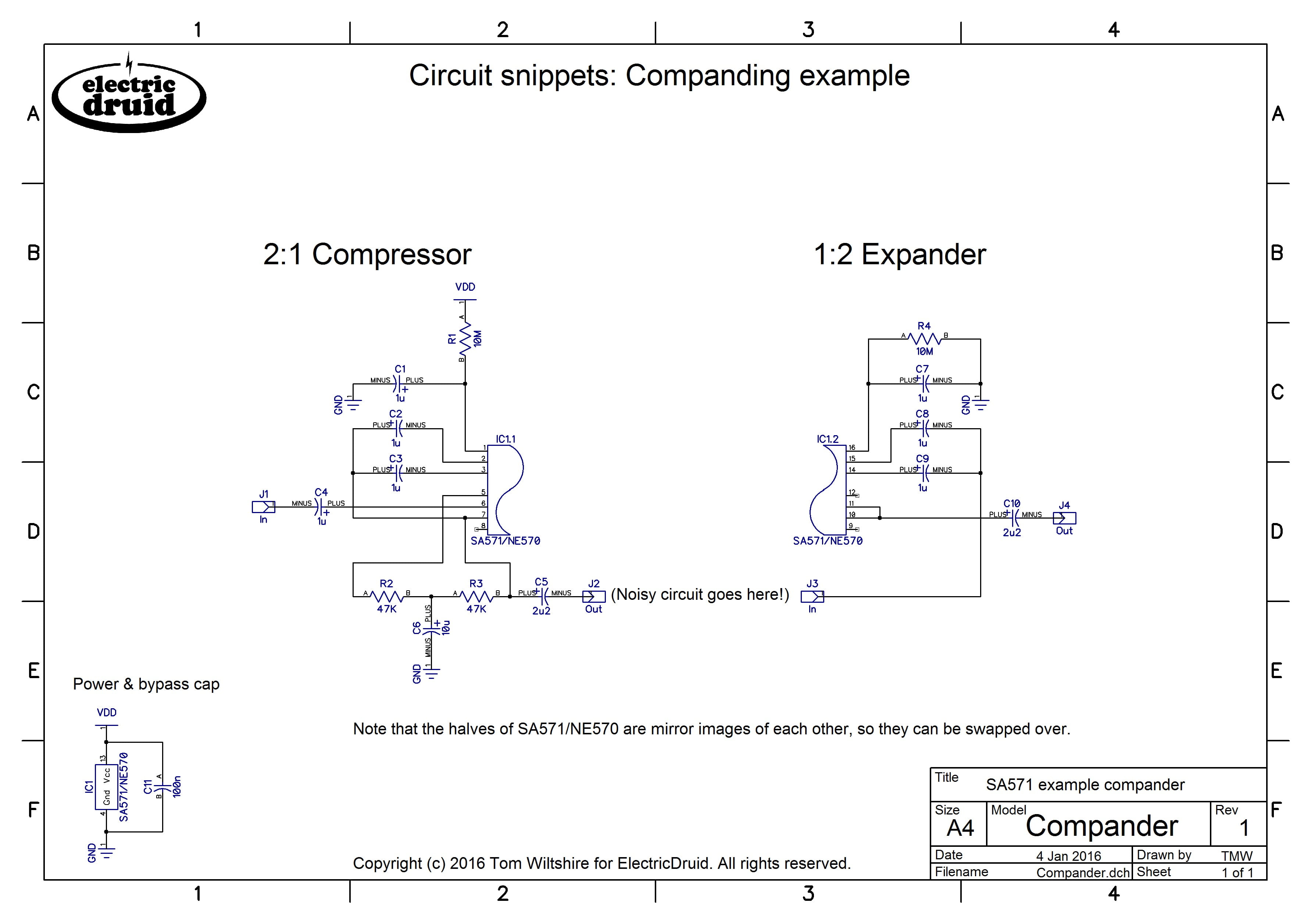 The C1 and C7 1μF values are a compromise between fast response and low ripple. If you want a faster response, try 470nF. If you want less ripple, try 2.2μF.

The technique is used in the PT-80 delay to reduce the noise added by the PT2399 delay chip. You can see on the PT-80 schematic the two halves of the SA571, one before the delay and the other after. The circuit values have been tweaked a little compared to my example above, but it’s otherwise identical.

It’s useful in any BBD-based circuit to help reduce noise from the BBD. The process will help reduce both noise from the BBD itself, and also clock feedthrough. This can make for a quieter flanger, chorus, or analog delay. The  compressor stage goes in front of the BBD pre-filter (the anti-aliasing filter), and the expander stage goes after the BBD post-filter (the reconstruction/clock filter). The diagram below shows the layout of a typical BBD-based pedal. This could be a delay, or it could be (with the optional LFO) a chorus or a flanger. They only differ in detail, not in structure.

This diagram makes it quite clear why good quality analog delays or flanger circuits are so complicated! That’s a lot of stages! Still, they’re all there for a reason, and if you want to try and reduce noise, you probably need to add a compander.

15 thoughts on “Noise Reduction with Companders”