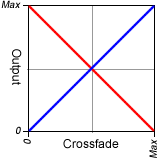 There are a number of situations where it is useful to be able to crossfade between two different signals with a single control. Examples might be a wet/dry control on a delay effect, or a waveform knob on an oscillator that goes from ramp to square continuously.
The simple and obvious way to do this is with a dual-gang pot. Each gang controls one signal, and it’s easy to wire so that as one increases in level, the other decreases, as shown in the graph.

But can it be done with a normal single-gang pot? Well, yes, it can. 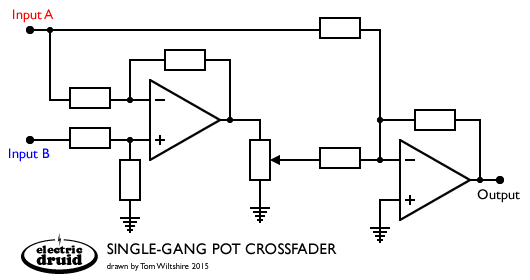 This circuit idea shows how. A differential op-amp has its inverting input fed from Input A, whilst its non-inverting input is fed from Input B. The output from the diff amp is Input B plus an inverted copy of Input A. With the Pot grounded, the output mixer only sees the direct signal from Input A. With the pot at the top, the direct signal from Input A is cancelled by the inverted copy coming from the diff amp, and all that you get is the non-inverted Input B. In-between these two extremes, you get a linear crossfade from one input to the other.

We can use this same concept to build a single VCA crossfader too. In fact, the single VCA version comes out simpler, since the VCA can fufill the roles of both the differential amp and the pot, and the I-to-V stage that often follows a VCA can be used as the final mixer.

Shown below is an experimental voltage-controlled Big Muff Pi tone control that I developed. The Big Muff’s tone control is essentially a passive cross-fade between a lowpass filter and a highpass filter. The circuit isn’t perfect, since the two inputs have different impedances, and the impedances are low enough to interfere with the passive filter networks, but there’s a ton of interactions in the original anyway, and this circuit works well enough as-is.

If you remove the lowpass RC and highpass RC and feed the two inputs from different signals instead, what you’ve got is a voltage-controlled single-VCA crossfader. Cool, eh?! 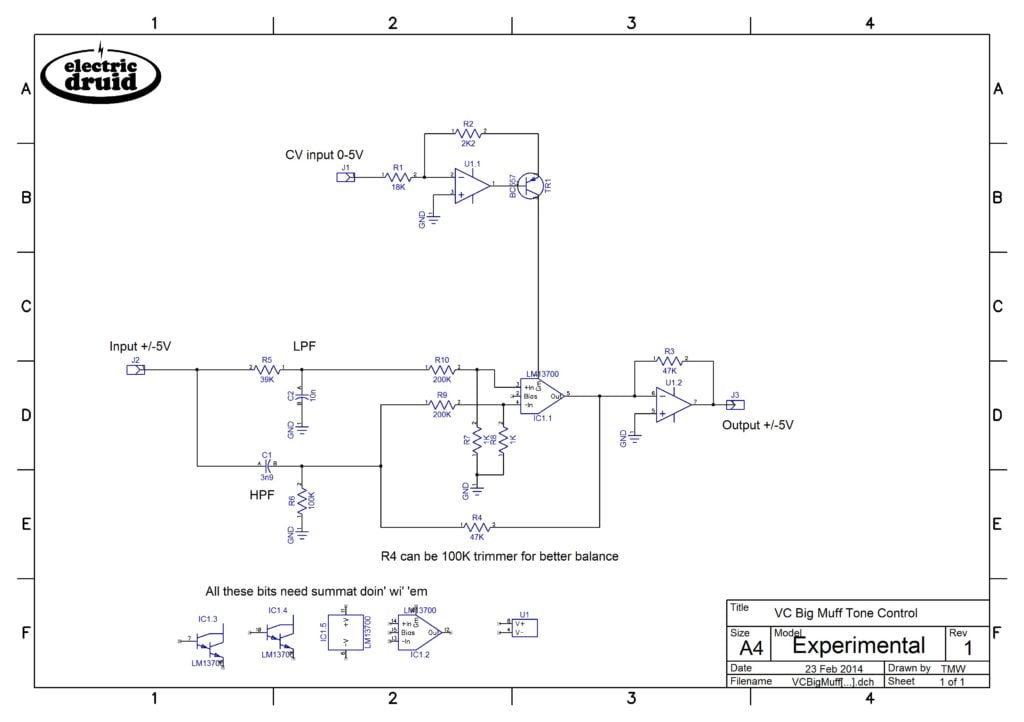 I built this using half a 13700 VCA, but it’d work equally well with the (extremely similar) CA3080 single VCA. Or you could use both halves of the 13700 and build a crossfader for stereo signals.